Last night: what could be more absurd than the sight of museum employees demonstrating for fair employment conditions? A scraggly group of a few dozen camped out in front of the old town hall (most recently the site of the Lebanese US Embassy in ‘Homeland’), singing songs and chanting slogans; the friends and family of the tour guides at Beit Bialik, the former home of Haim Nahman Bialik, Israel’s first National Poet. Scruffy, academic, educated, solidly middle-class, these were not the typical downtrodden and destitute, not residents of Channel4’s ‘Benefits Street’. Yet here they were on a chilly winter night, protesting the Tel-Aviv municipality’s hiring policy that condemned them to life on ‘freelancer’ contracts devoid of social security, health benefits or a state pension, and banned them from unionising or even talking amongst themselves while on the job. In the build-up to the protest, two “troublemakers” had already been fired without warning.

On September 3rd 2011, one in every 14 Israelis made their way to Tel-Aviv and marched from Habima Square to Kikar Hamedina in the name of social justice. On that sweltering summer night, the country euphorically announced its frustration with the economic status quo, a simmering anger that saw dozens of encampments spring up, all taking their lead from the hundreds of tents on Rothschild Boulevard, at the centre of the UNESCO White City.

Israel suffers from a parasitic industrial ‘free-market’ oligopoly. In the early 2000s, Bibi Netanyahu, as Finance Minister, privatised a swathe of state industries but didn’t disolve the monopolies those giant companies had enjoyed since the state’s independence. Buoyed by a captive, skewed market, a few ‘industrialist’ families (relabelled as the notorious ‘tycoons’) became very very wealthy, and a city that was already the most expensive in the Middle East saw prices skyrocket even as income stagnated.

After that night the euphoria broke like a fever dream, and the balmy summer passed. The people went home, the tents disappeared, and the city enacted a series of underhanded measures to make sure that the door was closed on a season of remarkably courteous, civil rage. All that remained was the status-quo-ante, and the pockets of protest that periodically fizzle into life (sometimes with tragic consequences) before extinguishing again into darkness.

Of course, yesterday there were the usual suspects of hard-core protesters and representatives of the local communist party, there to whip the crowd into a frenzy and elicit support for the next election, but generally this was a good natured protest of quiet, young, educated people (many of the slogans were puns on Bialik’s works) asking for the basic security that a public-sector job should provide. 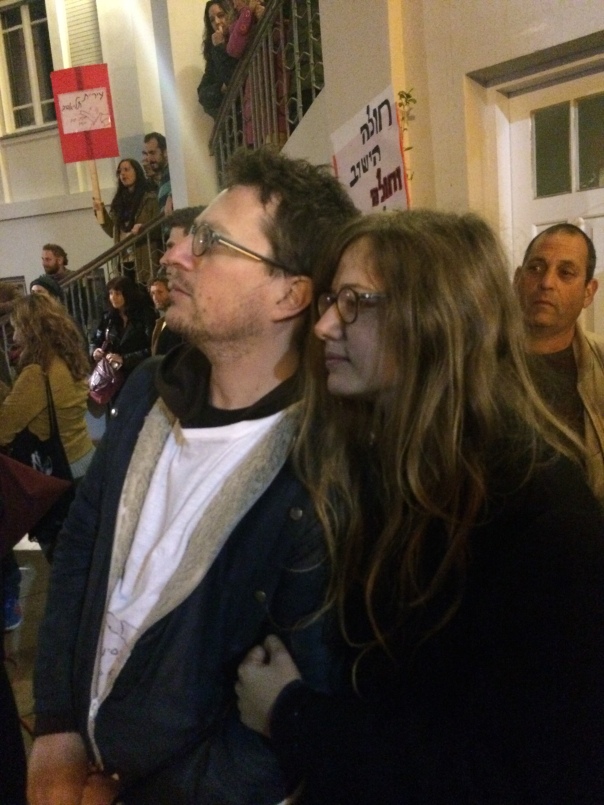 They are hardly alone: when I worked in the Knesset in the mid-2000s, I was stunned to discover that the diligent, talented researcher ants at the Knesset’s own internal Research and Information Centre, as well as being squirrelled away in a windowless, airless subterranean room beneath the amphitheatre, were all on short-term contracts for which they had to reapply every six months.

You’d expect issues like this to gain traction, but Israel is not a normal country, and Tel-Aviv is not a normal city. There is always the Palestinian threat, the Iranian threat, the ‘infiltrator’ Sudanese-Eritrean threat; always the simmering culture wars between Eastern and Western Jews, between the religious and the secular. Police have been given powers to break up threatening protests while intimidating potential popular leaders, and the economy is so concentrated that one break could send shockwaves throughout the country.

So a good-natured demonstration with very valid concerns splutters for an hour as locals gaze at the hubub as they walk their dogs, and a police car sprays everyone with blue lights as the cops themselves, bored, play with their phones. Then everyone goes home, and another cause is lost to the Tel-Aviv night.

← Of loss…
King Bibi is Dead! Long Live King Bibi! (Or: why the winner will lose and the loser will win; a short primer on the upcoming Israeli election) →