“It Won’t Stop Until We Talk”: a reflection upon the conflict in daily life.

Living in Tel-Aviv, strange things happen to your conception of risk and danger. On the one hand, it is a remarkably safe city – violent crime is surprisingly rare, and people of any gender, age or sexual orientation can walk at any hour of the day or night undisturbed. Yet, in the context of the Israeli-Palestinian conflict, it is incredibly dangerous.

We, here, don’t really think about terrorism, becoming blasé about the reminders of its toll, its randomness, that surround us and punctuate our daly lives. I surf by the site of the Dolphinarium nighclub bombing (1/6/2001, 25 dead); I purchase fruit, vegetables, bread and hummus daily at Carmel Market (1/11/2004, 3 dead, 30 injured); my favourite bar is opposite the Great Synagogue on Allenby Street (19/9/2002, 6 killed, 70 wounded); anything and everything is bought at Dizengoff Centre (4/3/1996, 13 killed, 130 wounded).Yet we don’t think about the dead or the danger, we don’t pause at the memorials that litter the city street. Stabbings, bus-bombings, on and on, heard in passing on the radio, passed on the bike. Life goes on, always…

Only the Memorial to the Victims of Terror in Park Yarkon in Tel-Aviv’s North gives me pause, for whereas the sites of attacks speak of atrocities past and personally avoided, the obelixes of black granite, carved with each victim’s name, are pungent with the stench of unfinished business: they are constructed with plenty of space for those not yet murdered. This future-planning is eerie: who’s name will come next? When?

It is that same sense of fatalistic hopelessness that shook me so deeply today as I passed a small, dour box erected on Rotschild Boulevard. Created by a group of bereaved Israeli and Palestinian families, the installation’s tiny windows peered into a box of mirrors, the single grave stone multiplied out into infinity. The simple message on the stone, in English, Arabic and Hebrew: “We don’t want you here.” This wasn’t a memorial to those whose names were already carved into granite, but rather those victims of the conflict yet to come.

And that’s the oft-unrecognised kernel of truth: that suicide bombers blow themselves up, that fighter jets drop bombs, that settlers rampage, that guerrillas fire rockets, that border policemen get bored and test their aim; and at the end of every bullet’s journey, every bomb’s blast, every piece of suicide-belt shrapnel, is a life lost, a family devastated, a community lessened. Each new death breeds and spreads more pain, and that agony is all at once personal, and individual, and collective. It retrenches and divides, even as it also should unite us together, on both sides. We have been killing each other; we have been causing each other’s suffering. We have nobody but ourselves to blame.

As those remarkable families have said: “It won’t stop until we talk.” Amen. 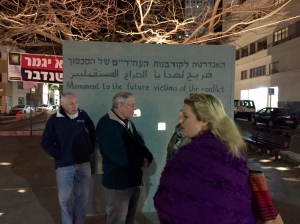 ← King Bibi is Dead! Long Live King Bibi! (Or: why the winner will lose and the loser will win; a short primer on the upcoming Israeli election)
Damn. →